Man Pans And Why I Love Them 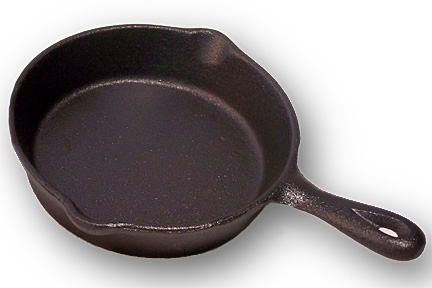 Ok, so at first I hated it.

Hubby insisted we buy one, why?  I am not entirely sure.

I think it spoke to his inner man-beast.  “Hey, this thing can be a cooking utensil and a weapon.. also fire is involved in the cleaning process, this is an awesome idea!”

So, into the shopping cart it went, as my lip curled with slight disdain.  “You clean it HOW?  That sounds like a lot of work. And you have to season it too?  Jeez….  this sounds like more work than its worth.”

Once we were home with this monstrosity of a pan, I quickly dubbed it the Man Pan. Why?  Because I refused to touch it.

I could barely lift the thing with two hands when it was empty (and I am a fairly robust woman who hauls around a 30+ lb toddler all day long), the handle got too hot to touch when it was on the stove.  And the process of cleaning it and seasoning it seemed somewhat daunting at best.

“No way,”  I turned my nose up at it, clinging tenaciously to my cheap Wal-Mart teflon-peeling, everything-ever-sticking-to, wobbly plastic handled, too small pans.

“It can go right into the oven….”  He taunted, waving the pan in my face, the smell of hot oil still clinging to the slick surface.

Say Wha-?!  This thing simmers and bakes?!  This I gotta see.

I was sold, as I om nom nom’ed my way through 2 delicious, fluffy, eggy pancakes, my lovely husband demonstrated the cleaning and seasoning process.

I still call it the Man Pan because there is something decidedly masculine about the thing. We’ve since bought a second one that leaves grill marks, but now I am not so afraid to use it.

Well… except for the one time I nearly set the kitchen on fire trying to dry the Man Pan off, but that is a whole different story.

STAND BY YOUR PAN