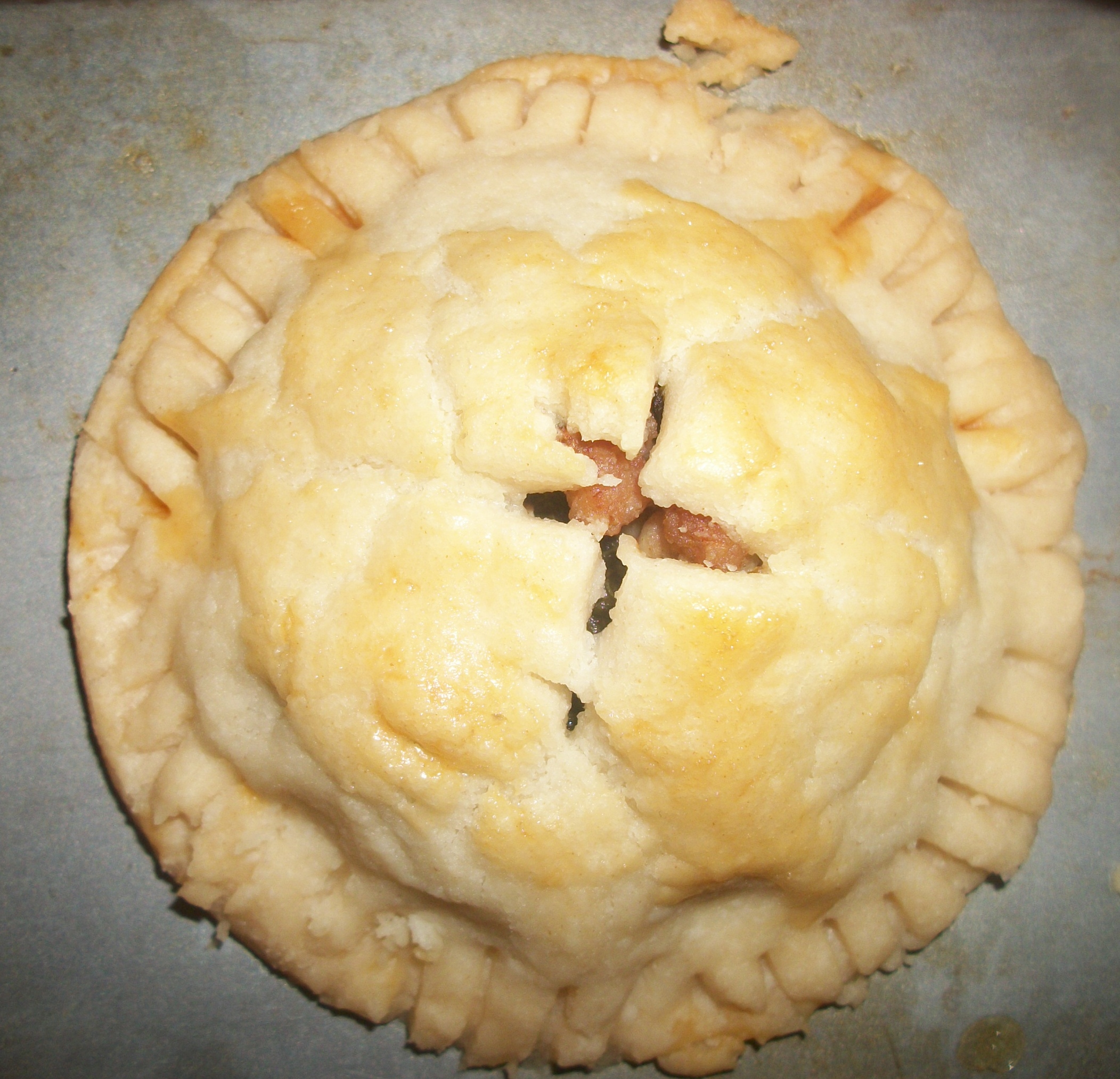 So I finally picked up some Kale. This thick, green, lettuce looking “superfood” I’ve been seeing everywhere (everywhere means Facebook.)

I think I assumed, at first, that it was a fancy lettuce, like spinach, which was the “it” lettuce of the 2000’s if I remember correctly, and had dubbed Kale in my mind “the hipster lettuce”. Imagine my surprise when I found out Kale is actually in the brassica family, akin to the delicious broccoli and Brussels sprouts that we like so much around here. Curiosity (and a sale at the grocery store) got the best of me and I picked up a bunch.

Flash forward to the kitchen: I’m holding the hipster lettuce. I sniff at it. I poke at it. I tear off a small leaf and taste it. I can’t decide what to do first. I look over at the ground pork thawing on the counter and inspiration strikes! Pie filling! For little tiny pies! Pork pocket pies, to be exact because alliteration is pleasing to me. We used two 9″ pies worth of pastry crust and ended up with about 15 pocket pies, you can buy ’em frozen if that’s your style or make ’em yourself, whatever cheeses your macaroni.

First things first, I drizzled about 1 TBS of olive oil into a pan to heat. I also drizzled a fair amount on my pants because I was trying to take a picture of my hawt drizzling action, and would recommend you skip that step. 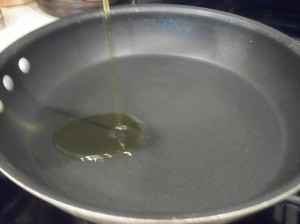 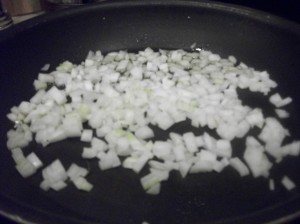 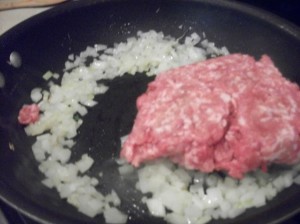 Next, I added one whole diced onion and a pinch of salt and pepper and cooked it on medium until the onion started to look slightly translucent. Then I plopped my ground pork in the pan, reduced the heat to medium-low, stirred occasionally, and browned. I am a “to-taste” type of seasoner and added some sea salt, fresh ground pepper, onion powder, smoked paprika and about 2 Tablespoons of A-1.

In the meantime, I busied myself removing the thick spine from the kale leaves then chopping them up and taking a food pr0n picture for all the kale-heads 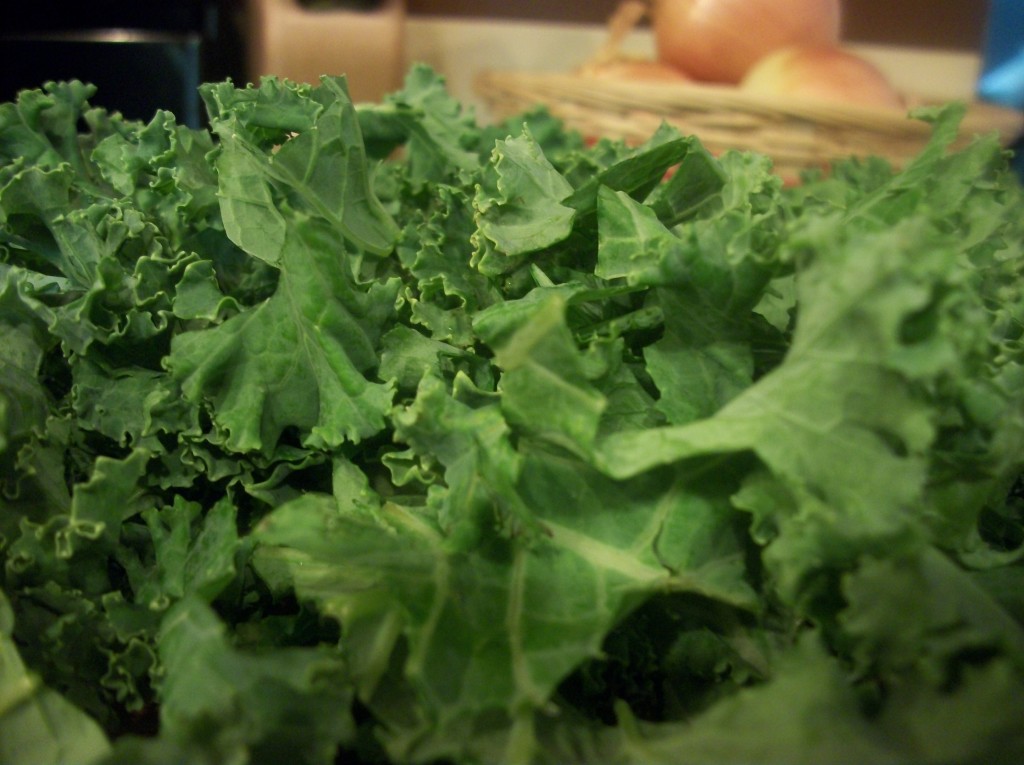 The chopped hipster lettuce went in the saute of onions and pork, along with a bit more salt, pepper, paprika, half a cup of beef broth, and a tablespoon of prepared yellow mustard. I cooked this down until very little liquid remained and then mixed in 2 tablespoons of corn starch to hold the filling together and set the mixture aside so off the heat while my lovely assistant and I prepared the pastry. 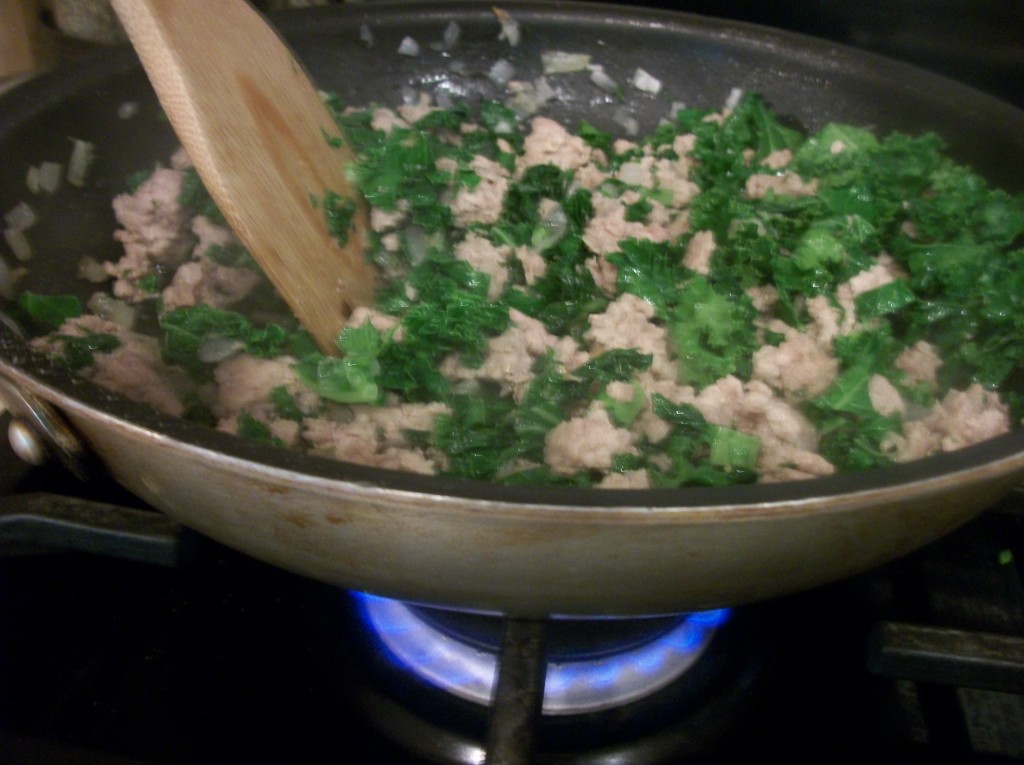 While the oven got to pre-heating to 350f, we rolled our pastry out to approximately 1/4 inch thickness and used a drinking glass to cut it into circles. We were able to get about 30 of them. Half of them went down onto ungreased baking sheets and were topped with 2 tablespoons of pie filling each.

My lil’ sous separated one large egg for my and mixed the white up to incorporate a good spoonful of tap water and we brushed the edges of each tiny, adorable little pie before topping them with the remaining circles and sealing the edges with fork tines. The egg yolk got mixed back in to the remaining egg wash and we lightly brushed each of those suckers with the new mixture (tops only, edges will burn) before cutting an ex-shaped slit in the tops (to allow steam to escape) and popping them in the oven for about 25 minutes (or until golden brownish, we started checking for doneness at around 20 minutes.) 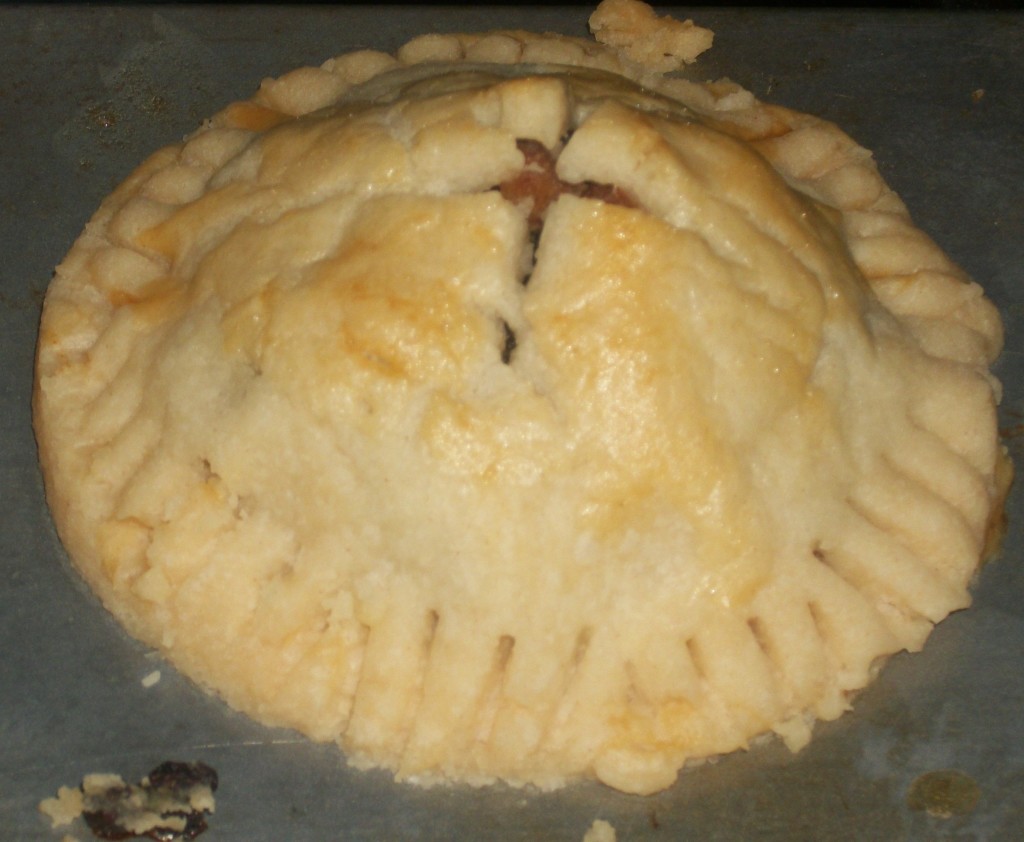 And here is a funny picture of two on a plate: 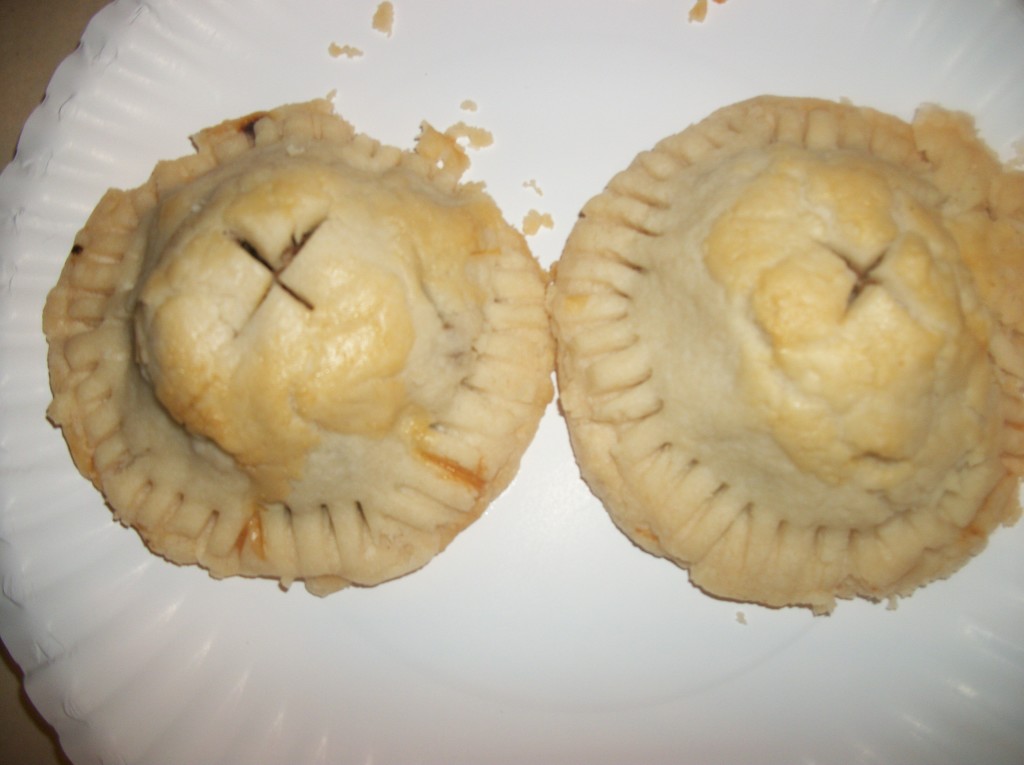