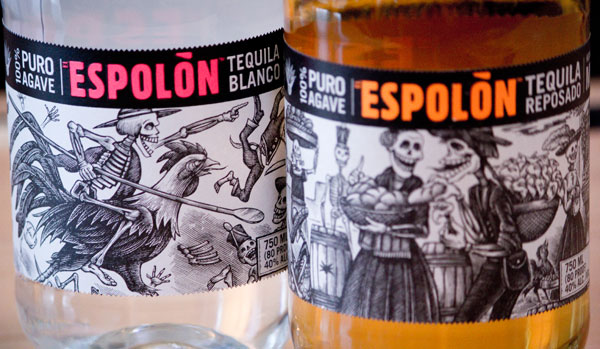 They always say to write what you know, so here I go…

I accidentally drank too much tequila last night.

As I sit here with the day half wasted and feeling like I’ve got a mariachi band doing somersaults in my head, I decided to turn my lemons into lemonade (…the thought of limes right now… ~shudder~) and turn my night of self-inflicted debauchery into a classy and educational tequila-tasting tale.

The two tequilas of choice last night were Espolon Blanco and Herradura Reposado.  I preferred the Espolon over the Herradura. I’m not sure if it was a brand issue, or simply the style of tequila.  The Blanco had floral notes in it, yet tasted peppery and seemed sweeter.  The face I made after shooting it was more appealing to onlookers than the face I made after drinking the Reposado.

The Herradura Reposado didn’t mask the flavor of alcohol as well as its counterpart.  It had more of a bite to it.  In my opinion, it would be a great choice for those tequila connoisseurs who would rather get right down to the business of drunken debauchery and not waste time with taste.

The Myth of the Worm 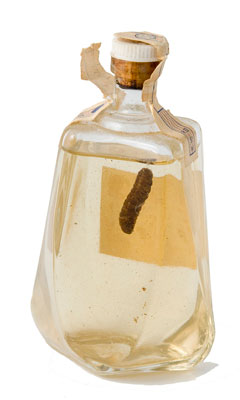 There was no worm involved in my evening. That I remember.

However, I can’t write about tequila in a quasi-intellectual manner without mentioning the story of the worm.  The infamous tequila worm is the larvae of a Hypopta agavis moth that, on occasion infests, the agave plant. Many people are unaware of this fact, but the “tequila worm” never actually appears in tequila, preferring to swim in bottles of Mexican mezcal instead.

At first,  mezcal companies tried to hide the presence of the infamous worm, because it implied a lower quality beverage. Really? An infestation of bug larvae somehow makes things less desirable?  Huh.

Yet some evil mastermind back in the 1940’s had the ingenious, and slightly brilliant, idea to use the worm as a marketing ploy. Little did he know he was establishing a long-lasting legacy of frat boy daredevilry for decades to come.  Who knew a worm could end up with so much prowess?

Experts believe that the agave plant has been used for over 9000 years. However, the first indication that an alcoholic beverage was made from the plant goes back roughly 500 years to Spain. It wasn’t until the 1800’s that tequila began to grow in popularity.

Although people are most familiar with three different types of tequila, there are actually five distinct styles of this Mexican beverage:

Blanco – (Spanish for ‘white’) Blanco tequila is the youngest and cleanest in flavor of all the tequilas. It is aged for two months or less and stored immediately after distillation.

Joven – Lesser known of the tequila styles Joven is Spanish for ‘young’ and is most often a blend of blanco and resposado tequilas.

Reposado – The teenager of the tequila world, Reposado, or ‘rested’ tequila is aged untouched for a minimum of two months in oak barrels and has a warmer and more golden flavor than the Blancos.

Extra Añejo – The mack daddy of all things tequila, extra añejo is aged no less than three years in oak barrels before it even sees the light of day. Dark, rich and smooth, a bottle of extra añejo is to be savored and not tossed repeatedly to the realm of your tonsils.

What I can say, with certainty, is that unless you want to wake up with a nasty shiner on your noggin, not knowing who or where you are, drink this wonderful beverage sparingly.  In excess, tequila turns you into a UFC wrestling dance queen with a soft spot for 90’s rap. Not that I would know.

I’m going to opt out on the ‘hair of the dog’ myth.  The best thing you can do, if you find yourself hungover, is rehydrate.  While cursing the gods and hanging onto the toilet with the abject terror of a first-timer on a badass roller coaster seems to help, it’s more of a fallout than a cure. Now if I was a smart tequila connoisseur, which I am obviously not,  I would have drunk water last night. And a lot of it. I blame the rap music for that misstep.

You may find that the water you drink the next morning will only come back up again.  If that does happen, don’t let it deter you from the goal of feeling human again. Keep drinking.  The most important thing is to keep trying to get the H2O back in your system.

Besides water, it is also critical to replenish lost nutrients.  Bananas are great because they have the potassium you lose from well… peeing so much.  Honey is said to prevent headaches –  it has fructose, which messes with the alcohol’s ability to be metabolized. Ginger ale is also great. We all know from our days of colds and flu how the ginger root can ease nausea.  Foods that boast clear liquids such as soups and ummm…  I guess soup.  Again, it’s importante’ (that’s the tequila talking because it’s still drunk and thinks it’s Italian) to raise your blood sugar up to a healthy level.

So far, my personal hangover remedy has consisted of nachos, throwing a chicken in the crockpot (I even pulled the neck out with my bare hands, that’s how hungover, dizzy and not giving a *&$% I feel) drinking water, taking some ibuprofen and watching the best baseball movie ever – 8 Men Out.

Today was not a complete bust, which should be the point in all of our days.