As a kitchen rookie, so far I have very few dishes under my belt. I don’t often find myself cooking, but when I do, I keep it simple – very simple. I can manage a few familiar ingredients, one step at a time, with explicit instructions and I typically do best with supervision. Attempting Asian Slaw with Peanut-Ginger Dressing was a seventeen-ingredient adventure with two components – the dressing & the slaw. This dish was a whole new ballgame and somehow, I managed to survive. 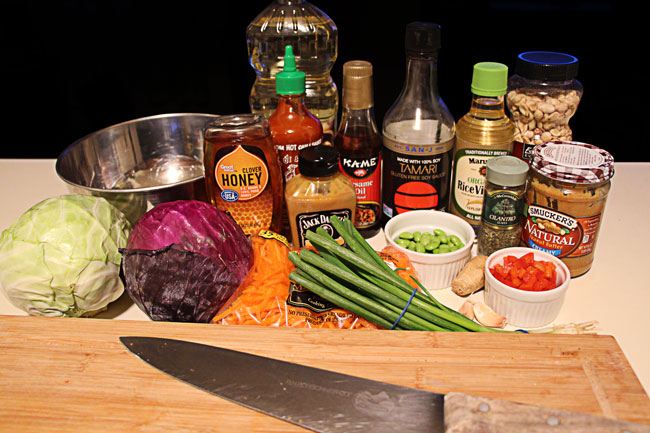 Though, I never could have pulled it off without Googling:

This project started by making the peanut-ginger dressing. Though this part of the dish only required measuring and mixing ingredients, for me, there were still some challenges. I felt like a master chef handling the:

When it came time for the gooey, sticky ingredients like:

…things got a little more awkward. That stuff doesn’t just pour out of the measuring receptacles.

Just when I thought the dressing was almost done, it came time for the fresh ginger – something I’d never seen before. On Google, it looks like what it is, a root. The piece I had to work with looked more like a little poop. I know, immature, but it’s not exactly a lie. 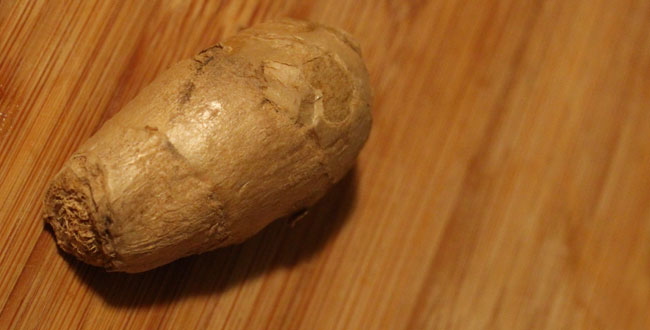 I had to figure out how to mince this fresh ginger. Do you know that you need to peel it first, like a carrot? Well, news flash – you do! I successfully navigated the peeler for the first time since the potato incident (a story for another time) and located the fragrant, yellow treasure underneath the skin. Using my garlic chopping skills, I minced this up like nobody’s business and threw it into the dressing mix.

After everything was mixed and the peanut butter had dissolved, the dressing was ready to go!

Then it came time to put the rest of the veggie ingredients together into the slaw. The recipe called for prepared shredded slaw.  I didn’t have that – all I had was cabbage. So, I chopped it up into something that looked slaw-like. I still don’t know the right way to do this but fake it till you make it, right? The carrots, I didn’t fake – I just bought them pre-matchsticked. Wait, is that faking it?

Next, the edamame. These I’d seen before when I’d ordered them as apps. I know to stick them in my mouth and pull out the beans from the pods.  How do you get the beans out without your mouth? I squeezed them out using my fingers into a bowl, but not without several going airborne – them beans are slippery! I have to wonder how the pros do it.

I’m no rookie when it comes to red bell pepper chopping, so I chopped that up in no time. Scallions required some Googling, but once I had a visual reference for the little green circles, I nailed it. Peanuts were a lot of fun to chop, even though they rolled everywhere. As for the cilantro, you can use dried in replacement for fresh (though it’s a flavorless rookie move). At least this rookie learned to use a tablespoon instead of a quarter-cup.

Once mixed together, I allowed the dressing to soak into the slaw. Then, you’ll never guess what happened next… 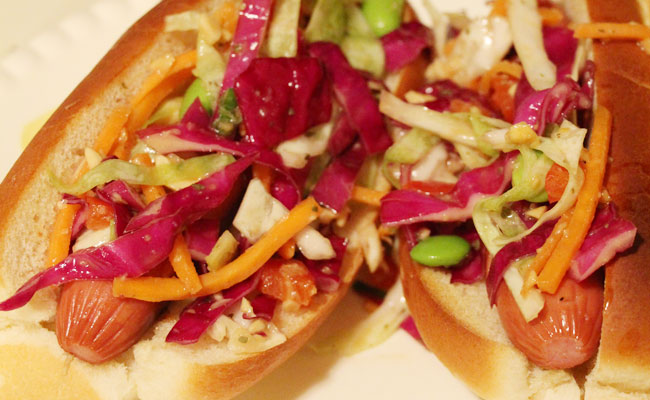 The Asian Slaw was done and it was actually delicious – I’d hit it out of the park. I put all that effort into making a beautiful, colorful salad only to have my girlfriend dress her hot dog with it.