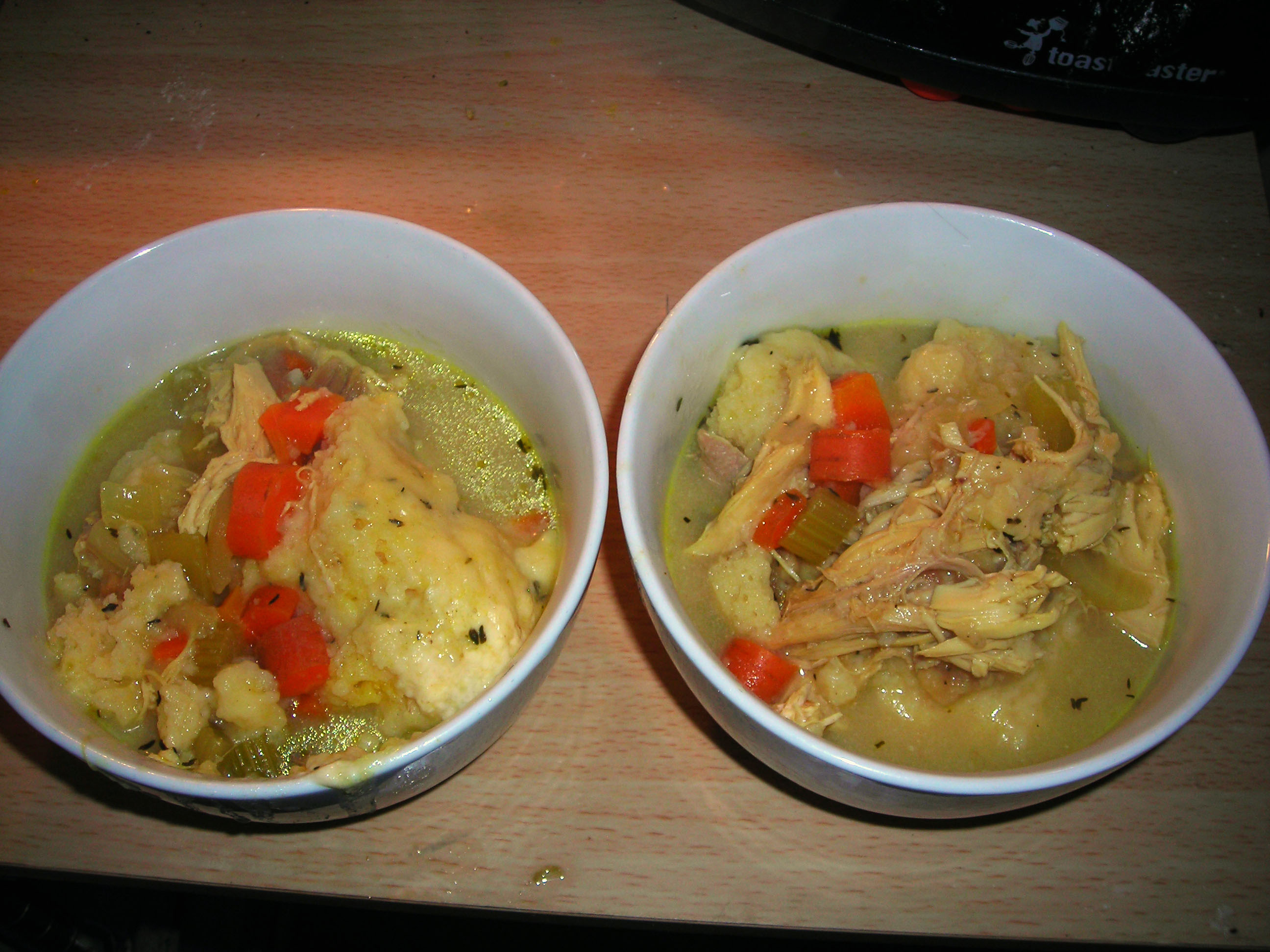 Ah, chicken and dumplings.  Is there anything like it on a cold, wet, dreary day?  Not for me.  It’s the food version of a warm blanket, a good book, dry socks. The problem is every recipe I have found usually takes a huge amount of work.  I am a housewife, I should have plenty of time to spend in the kitchen making scrumptious dinners.  Honestly, about 90% of my day is simply doing damage control on the house. I have a toddler who thinks he’s a sherpa and that anything higher off the ground than 2 feet must be the Himalayas.

So I was absolutely thrilled when I found a recipe on The Pioneer Woman’s food blog that promised quick results.  My joy was short lived however when I saw the list of ingredients.  Butter, olive oil, heavy cream, half & half.  Now, you must know I am not a fan of this thing called dieting.  I love my butter as much as the next chubby American housewife.  But I could feel my arteries slamming shut while I read the ingredients list.

I was bound and determined to have my chicken and dumplings, however, so a few modifications would need to be made.

First, the recipe called for the use of a whole cut up chicken.  I used half of one, well… part of half of one, a half breast and 2 thighs.  We are a small family so I didn’t feel an entire chicken was warranted.  The other half of the chicken would make a good meal for another night.  You can use more or less chicken depending on your preferences or how many mouths you need to feed.

While you are rinsing the chicken, trimming skin and fat and whatever other disgusting looking things you don’t want to see in your broth you want to have a nice little drizzle of olive oil heating up in a large soup pot on medium-high.  The original recipe called for 2 tablespoons of butter as well, but figuring the olive oil would do fine on its own and be slightly healthier for my family; I left out the butter altogether.

While your pot is heating up you want to dredge your chicken in a mixture of flour seasoned with salt and pepper.  Now, this is usually the part where I dump at least a quarter of the dredging flour onto the floor.  Why?  Because I am an extreme cook and the chicken just doesn’t taste the same unless I have flour on every available surface in a three-foot radius.

Place the chicken pieces in the pan to brown.  I fit all of mine in at once, but if you are doing a larger amount of chicken, do it in batches.    While the chicken is cooking you want to get out your aromatics and dice them.  I used about 4 large carrots, 4 stalks of celery and 1 medium sized onion.  Dice them up into chunks.  You want them to be large enough that they give your broth a bit of texture, but small enough that you can hide them under a bite of dumpling or chicken; because like me, you may have a very picky veggie hating toddler.

When all the chicken is browned (don’t worry about it being cooked all the way through, it will go back into the pan in a few minutes.)  Toss your veggies in the pan, turn the heat down to medium-low and give them a stir (Tada!  One pan meal!  Whoo hoo!)  making sure to scrape up some of that tasty chicken gunk and mixing it in.

Let the veggies cook for 3 – 4 minutes, stirring occasionally.  After that is done you add your spices.  Here’s the part where I mention again that I am an extreme cook.  I like to live on the edge.  I laugh in the face of measurements (unless I am baking, then I bow my head humbly and follow the rules).  So I can’t honestly tell you how much thyme and turmeric I used.  A large amount?  Yes.  More than the original recipe called for?  You could bet your hat on that.  Pioneer Lady says to use 1/2 teaspoon of each.  My spice dosage was probably a little closer to 1 tablespoon of thyme and maybe 1/2 tablespoon of turmeric.  The thyme was perfect.  Next time I will go a little lighter on the turmeric; that stuff is a pain to clean off a stove!

Anyhow, stir in your spices.  Now its time for the chicken broth.  You have several options here, you can use low sodium canned broth, homemade broth, that better than bullion goop or simply the cube

s and some water.  I used the cubes.  Because that’s what we had on hand. 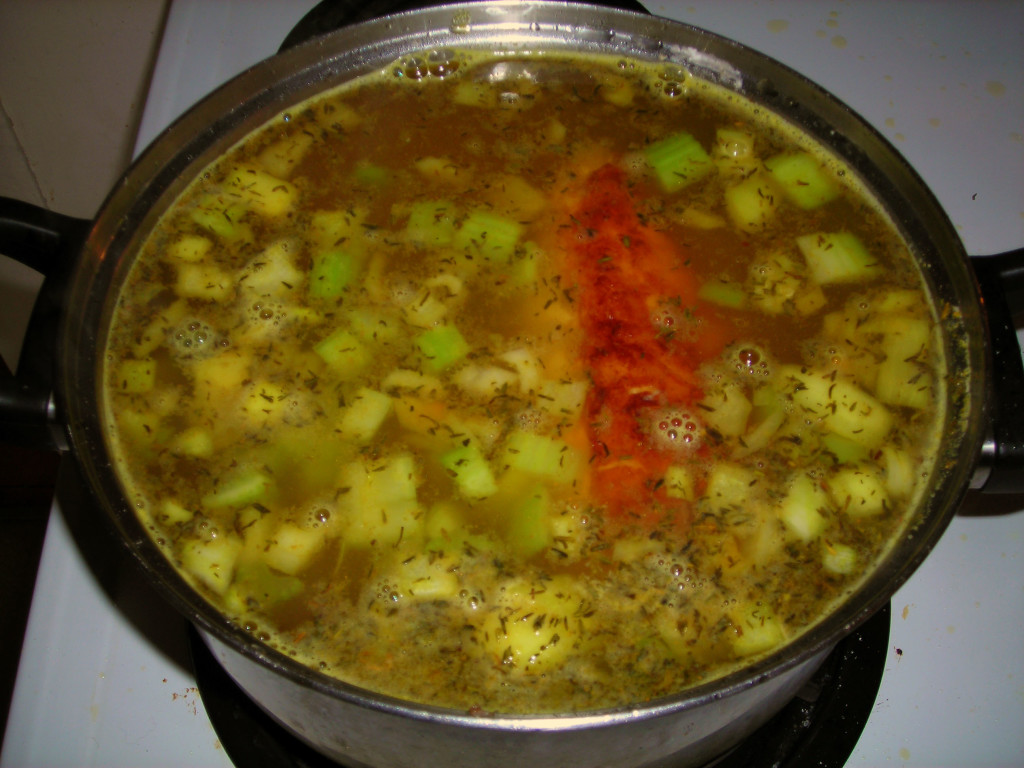 Now, the amount of broth you use depends on two things.  How many people you need to feed and how big your pot is.  While the original recipe called for six cups of broth I only used four.  Partially because I only have 2 adults and 1 toddler to feed, and I have a very small soup pot.

Next, you add in about 1/2 cup of apple cider.  Yep, apple cider.  Why?  Because it’s good.  That’s why.  Stir your broth up and- Oh hey, what’s that over there?  Doesn’t your browned chicken look a little lonely?  Add that to the pot as well.  There, that’s better.  Cover the pot and let it simmer.  The original recipe said 20 minutes would do it, but the first time I tried the recipe the chicken was still not thoroughly cooked after 20 minutes when I removed it for shredding.  This time I left it in for a  good long while, hubby was working late, and the tot was napping anyway so I was in no rush to get dinner on the table. 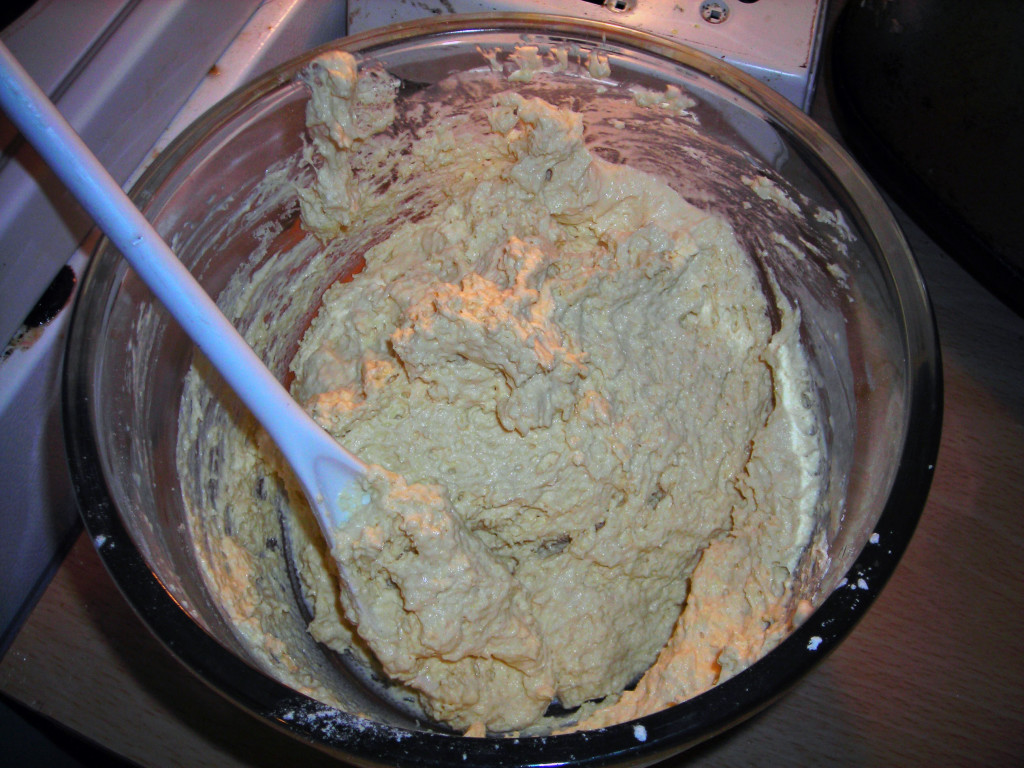 When hubby got home, the broth had been simmering for about an hour, so I headed into the kitchen to make the dumpling batter.  The Pioneer Lady says in her blog that what makes a good dumpling is cornmeal.  She is 100% correct.  This batter called for flour, baking powder, cornmeal, salt and half & half.  You could probably use milk instead, but I had some half & half on hand so I used some of it.

Any kind of cornmeal will do for the dumplings, it is mostly to give them a little bit of texture and to keep them from getting too glutenous.  The stuff I used was the very fine masa harina, usually used to make corn tortillas.  It has a nice mild flavor and a fairly fine texture.

On my first run of this recipe the dough freaked me out, it was turning out like cake batter, so I added a 1/4 cup of extra flour to dry it up a bit.  It worked and we had some nice dense dumplings in the end.  The second time through I just kept stirring and stirring and the dough stiffened up on its own;  the end result being lighter fluffier dumplings.  I liked both outcomes pretty well, so it really depends on what kind of dumplings you prefer.

After the dough is mixed, remove the chicken from the pot (again)  and shred the meat with two forks.  The stuff should just fall beautifully off the bone with no problem, if not, it probably needs a little more cooking.  I removed most of the skin as well, because I don’t like the texture, but again, that is all preference.  Dump the shredded chicken back into the pot. 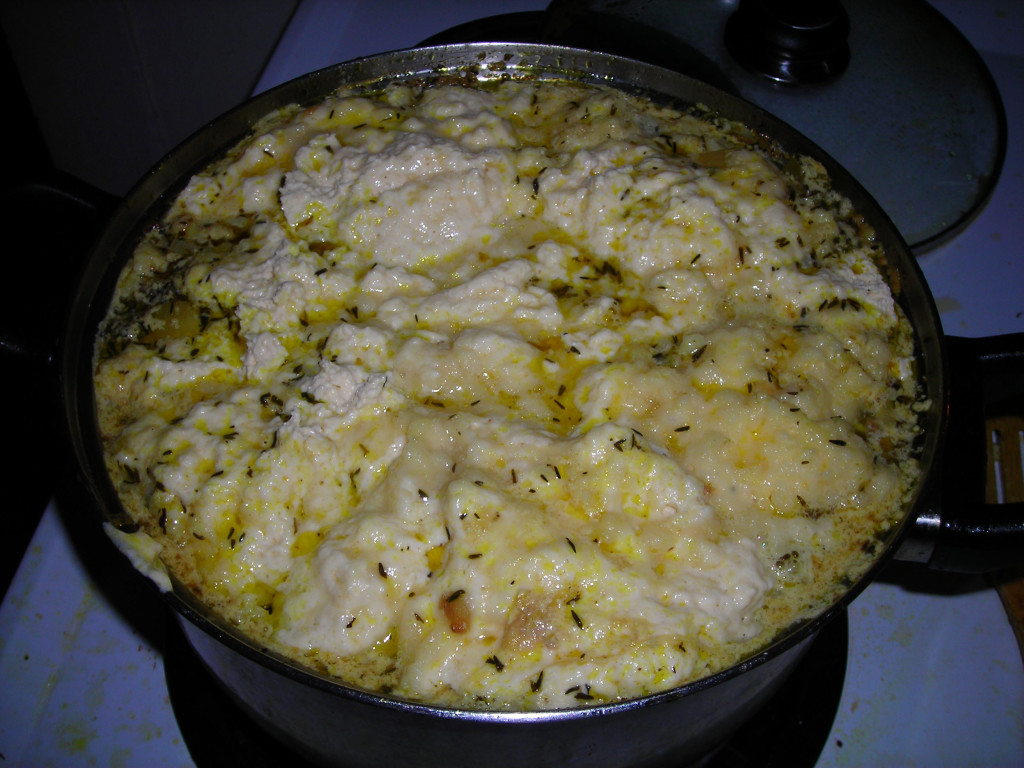 This is where Pioneer Lady tells you to add 1/2 of heavy cream to the broth.  I just used the remaining half & half from the dumpling dough.  You could even use milk, or put nothing at all in.  But I gotta say that the added dairy gives the broth a wonderfully creamy texture.

Adding dairy to hot liquid can be difficult.  I have a hard time with it and about 50% of the time I end up with weird little curdles in my sauces, soups or whatever I am trying to make.  The first run of this recipe I tried microwaving the half and half to warm it up, which didn’t work at all.    This time around, I dumped the half and half into a measuring cup and very carefully started adding broth to the half and half and stirring briskly until the half and half was nearly the temperature of the broth itself.  Then I just dumped the slog in and gave it a good stir.  No more curdling!! 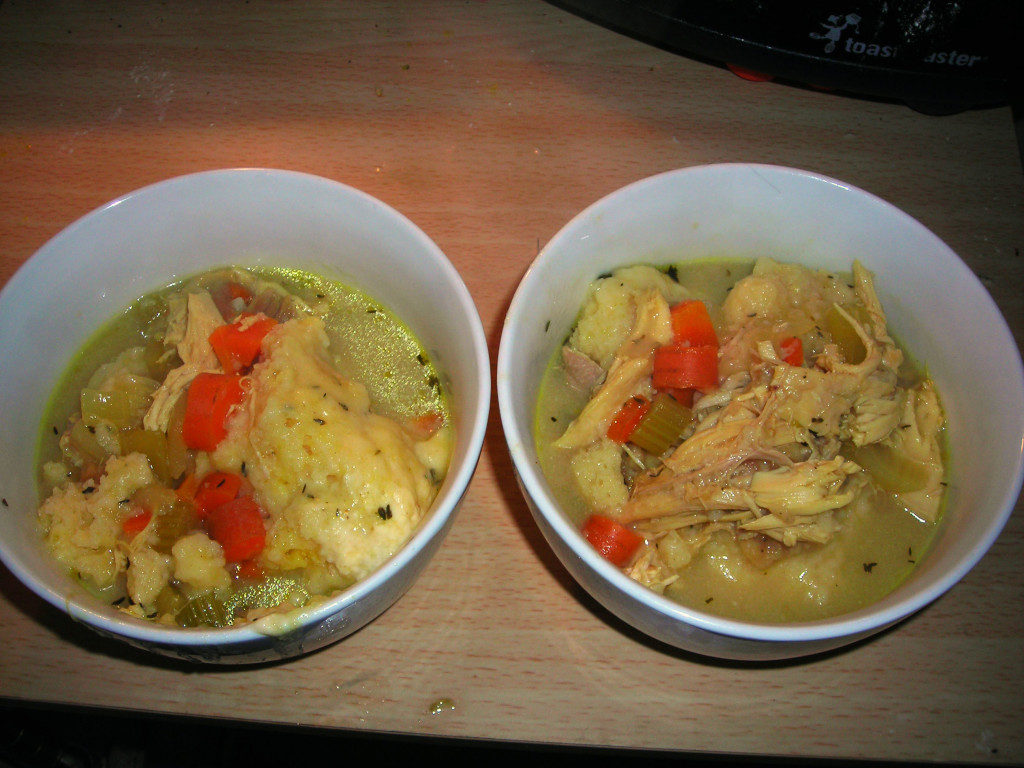 After the half and half is successfully incorporated into the broth, use a spoon to drop big globs of your dumpling dough into the soup.  Place the lid back on your pot and let the dumplings cook for about 15 minutes. Another reason to not add too much chicken stock into your pot is that you want to have enough room for your dumplings to cook without touching the lid. When the dumplings look like fluffy little clouds, you are good to go.  Spoon into a bowl and serve!