“Spatchcock?,” I said to myself, “hahahahaha, sounds like dirty jokes!”

So yes, it initially piqued my interest because I’m still a little twelve sometimes. I also roast whole chickens fairly regularly once the weather cools off, even though the latest trend seems to be discarding the actual chicken and just, like, making foam with the gut bags, or something Top Chef-ish. My mate and cubs all like roast chicken, which right there puts it in rare air, but the fact that I can re-use the carcass for stock and any leftover meat for a wide variety of different lunches or dinners makes it worthy of the time and preparation involved.

This method, which is thought to hail from 18th century Ireland, according to the few articles I kinda skimmed before embarking on this adventure and promised to be faster and more flavorful than the methods I usually use, and it has a funny name so I gave it a shot.

It kind of gets a little gross, so if you’re squeamish about meat, probably don’t look further. 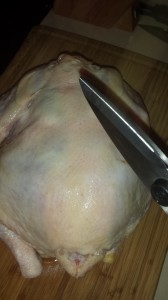 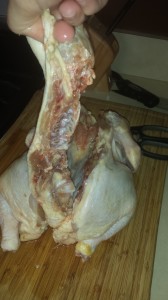 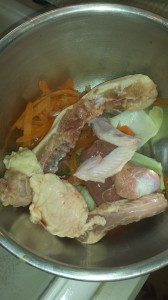 I followed these instructions for the initial preparation of the chicken, starting by removing the innards and laying the thing breast side down on my meat board, and getting out my poultry shears. I don’t have all the kitchen things one would want, but I actually do have a pair of poultry shears and I use them all the time (to open popsicles for my kids). Using my trusty popsicle openers, I carefully cut from butt to head along either side of the spine and tossed that into my bowl of chicken stock ingredients with the innards and my vegetable cast offs for later use. 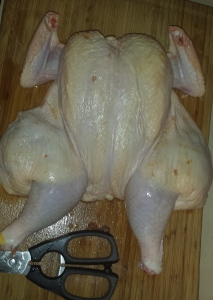 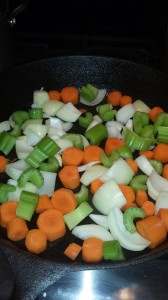 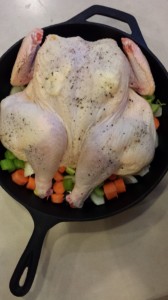 Next, the bird gets flipped (I put that joke in there for my fellow dorks) and pressed flat. It takes a fair amount of pressure and makes some icky cracking noises, so be forewarned.

I wanted to keep it fairly simple as far as flavors today, so I chopped up some onion, celery, and carrot, and peeled a couple small garlic cloves and set them in my cast iron pan with a little salt and pepper and a bay leaf. I also kept the seasoning simple on the actual chicken, putting a small pat of butter under the skin on each breast and generously salting and peppering the rest.

The articles I skimmed led me to believe I’d have to cook the thing for half an hour, maybe 45 minutes to get the inside to 165f, but in reality, I cooked it in a 425 degree oven for close to an hour before it was ready. I’m not sure why it took longer and will update if I figure it out.

My overall adventure was fruitful with perfectly roasted chicken and lots of dirty joke snickering, and it may not replace my classic chicken roasting method, spatchcocking ain’t bad. 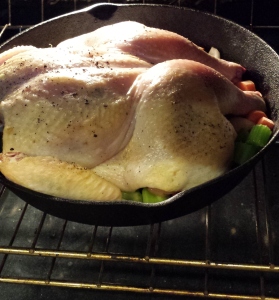 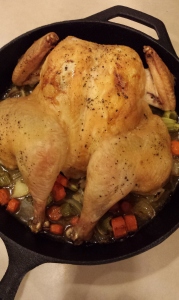