Jambalaya You Have NOT Defeated Me!

by Blade | Cook It 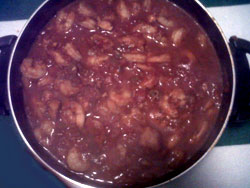 I’m a fan of Cajun and Creole food.

I like the earthy spices combined with just enough heat to make the dish flavorful but not so hot it turns in to rectal regret the next day.

One of my favorite dishes is Jambalaya. What I like about it most is its versatility.

You can use a variety of meats depending on what you like. You can also add the veggies of your choice, and leave out whatever you don’t like (in my case okra). The amount of heat can also be adjusted from timid to bold, depending on your taste and pain tolerance. A nice bowl of Jambalaya on a chilly winter day can really hit the spot!

I think it was around the first time I made, or shall I say attempted to make, this dish that my allergy to recipes developed.

The first time I attempted Jambalaya I was really excited… until I plated up the final product and was staring at a big mass of starchy glop.

I’m not a fan of wasting food, but this stuff had to go. Undeterred, I attempted to make it again, but this time I tweaked the recipe… and came up with similar results.

After my third disaster, I sat down and analyzed what I had been doing wrong. The first thing I did was get rid of the okra. It can be slimy and challenging to cook with. The next revelation that came to me was simple, yet frustrating… I have come to the conclusion that rice is not my friend! I love steamed rice, but unfortunately cannot cook it to save my life. Now that I have discovered the problem how do I fix it?

And then it hit me.

I love pasta, it would work well with the Jambalaya, and I can cook pasta!

Once I got over my epiphany, I decided to scrap every Jambalaya recipe I had and just rely on my instincts, and guess what…. it worked! I thought about the ingredients I liked and disliked and made what I thought would taste good.

This recipe is the result of fine tuning a bit here and tweaking a bit there. Let’s be honest, I do this every time I cook!

Andouille is a great sausage. I don’t care for the commercial stuff, preferring locally made.
Keep a smaller can of tomato sauce handy in case you need to add more.
You can use Essence Cajun seasoning but I prefer Paul Prudhomme’s Poultry Magic
Why bay leaves? Because I put bay leaves in EVERYTHING!
This is my version of Jambalaya pasta, I hope you try it. As always, make the recipe then make it your own.