Ten Foodie Things We Loved in 2013 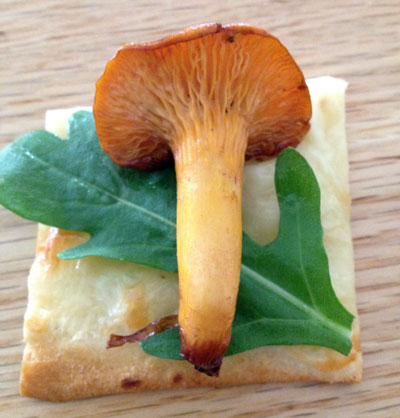 Ten Foodie Things We Loved in 2013

Chanterelles, Chaga Mushrooms, Stinging Nettle, Fiddleheads – these are but a few of the natural treasures we have been harvesting from our backyard. Chanterelles are the gold of the fungi world – golden in color and golden in price as well. Unlike any other edible mushroom, these sunny beauties have a delicate, aromatic effect on the palette and are sought after by chefs the world over. As with ANY mushroom foraging, we cannot emphasize strongly enough to be very precise and accurate in identifying your mushrooms. The sneaky devil mushrooms that kill you for sport have a tendency to make themselves look nearly identical to the tasty ones.

Chaga Mushrooms are the ugly, unloved stepsister of the fungi world. It took us years to realize that these strange black formations on our birch trees were not the leprous tree skank we suspected but actually loaded with incredible healthy, beneficial goodness when consumed. Sure, they are a parasite. So what? The Russians have had this stuff figured out since the 16th Century. Anti-inflammatory, antioxidant, immunotherapy and strongly suspected to have powerful cancer-prevention abilities, these babies run $50 an lb. and make a mean cup of tea.

Stinging Nettle, edible? Whaaaaat? M’mmm, you heard me. Edible. And if prepared correctly, and CAREFULLY, you too can consume stinging nettle without bleeding from your taste buds. Who knew? Loaded with vitamins A, C, iron, manganese, calcium, and potassium, this abundant herbaceous plant tastes a bit like spinach and cucumber, and was a staple of many a Native American tribe.

The Fiddlehead Fern is only available in its regional habitat, and is, in fact, the young shoots of only a handful of varieties of unfurled fern plants. Luckily enough, the supermarkets in our region offer these baby beauties by the pound each spring, and we welcome their arrival with glee. Best served sauteed with a bit of butter and a sprinkle of sea salt, fiddleheads are loaded with omega-3 and omega-6 fatty acids and offer a wonderful nutty crunch.

It’s as if the heavens opened up and God bestowed his grace upon us mere humans. Good beer in blissfully lightweight and easily portable cans. At last! Say goodbye to bitter beer face and all other forms of liquid stank. Hello, hiking, kayaking, beer-loving nirvana!

Canned beer historically got a bad rap in the 1940’s and 50’s because the tin in the cans affected the taste of the beer in the vilest of ways. For the longest time, canned beer has suffered the stigma of rank swill, the cheap stuff, lowbrow. No longer is that the case. Award-winning beer crafters like Colorado’s New Belgium and Vermont’s lustily sought-after Heady Topper are delivered in lightweight can form. Even Sam Adams has jumped on the bandwagon. But don’t mistake this for a trend or a marketing gimmick – cans actually make for better tasting beer than the garden bottle variety. My hiking days will never be the same again! Hallelujah!

You know, some days catsup is just so damned boring. Catsup, mustard, mayonnaise, bottled barbeque sauce. Yawn… There are just so many other condiments in the world to sauce up your meals in a fresh new way. The condiments we’ve been geeking over lately come from other cultures and have practically reinvented the most American of foods – the hot dog – never mind almost every other dish we’ve been dumping these goodies on.

Jufran Banana Sauce is from the Philippines and is technically a catsup. Made with bananas instead of tomatoes, Jufran is a Filipino household staple – the Heinz of the Island, so to speak. Whether you opt hot or mild, there is no doubt you’ll love this stuff on your burgers, dogs, and scrambled eggs. We know we do!

By far one of the biggest Japanese exports, Kewpie Mayonnaise is not only adorably branded with a cute little kewpie doll, it has single-handedly revolutionized my relationship with sandwiches. Seriously, it’s that good!

Kuchela was something we discovered in a divey local Caribbean spot. The matriarch of the restaurant was a displaced native of Trinidad and sold small jars of her own handcrafted kuchela in addition to serving it with her amazing dishes. A mango-based chutney loaded with heat and herbs, this is not a condiment to be underestimated. Damned fine discovery, if I do say so myself, and a keeper.

No international condiment list would be complete without the inclusion of Siracha, or Cock Sauce, as we like to call it. It simply goes with everything. Period. And what a scare in 2013 when it was rumored that the Siracha manufacturer would be forced to close their doors due to whiny neighbors complaining about the smell. Seriously people, just move! Thankfully, Siracha has been able to keep their doors open and we can continue to feed our addiction. If you are interested in experimenting with making your own condiments, check out our Green Tomato Chutney recipe.

I am seriously in love with Filipino food and have often wondered on many an occasion if the proprietors of Jeepney NYC would be too terribly bothered if I moved in and set up a cot in the back. And I have to tell you, sharing balut for the first time with my teenager has without a doubt ranked at the top of my list of 2013 events. Chori Burger, Chicharron Bulaklak, Dnuguan & Puto, and the infamous Balut – all can be found at Jeepney, and I strongly suggest you stop for a bite the next time you find yourself in the East Village. Don’t get caught up on the name or pronunciation of the dishes, and don’t get tweaked out by trying to dissect the ingredients listed on the menu. Just order, close your eyes and partake of this elevated cuisine. You will be glad you did.

Things I have learned about “Gluten Intolerance”:

Now. Imagine my delight to discover that not one but two (!) different scientific groups did research on this oh-so-mysterious-yet-oh-so-rampant gluten “allergy” and both independently came to the same conclusion: it is not a food disease but a food neurosis. That’s what I’ve been saying all along! How else would you explain the fact that it seems to exclusively strike white middle-class American women? Either y’all got something wonky living in your suburban water supply, or you are simply bored, neurotic, trend-following attention-seekers. Don’t believe me? Do your research. Less than 1% of the human population actually suffer from celiac disease, and even less than that have a wheat allergy. In the meantime, here’s a chuckle of an article about gluten intolerance: 5 Signs Your Gluten Allergy is Fake
6.

Native to North America and not know by the masses at-large to be edible, Prunus Virginiana is known as Chokecherry, Bitter-berry, and Virginia Bird Cherry and considered by many to be an invasive pest of a shrub. Long a nutrient source for the Native American tribes of the Northern Rockies and Northern Plains, these tart little morsels make the most divine jams and syrups.

We were ecstatic last year when family members visited from the Western climes and helped us successfully locate and identify our own local chokecherry shrubs. Ten pounds of berries later, we were canning our own Chokecherry Syrup. Seriously, people, this stuff is the nectar of the gods.

We finally caved this year, got trendy, and purchased our own chickens. Two to be exact. Charlotte and Omelette. Lovely and strange little creatures, with their cooing purring sounds, screaming egg-laying squawks, twitchy bobbing heads, and beady little eyes. They were ugly and scrawny when we got them, too young for full plumage and quite obviously going through their awkward teen phase. But now they are sleek and sexy and laying the most gorgeous, finest-tasting eggs I have ever experienced. So fine, in fact, that we plan to get more playmates for the coop this year.

With the constant influx of fresh eggs into our household diet, we began to try all kinds of fun egg-based dishes. Omelets, scrambles, quiches, etc etc. One of the most fun dishes we did was Eggs in Purgatory. Traditionally an Italian dish, but embraced, adopted and modified by the Spanish, it’s an intense-looking yet utterly comforting meal. Perfect for a cool night, and rumored to be a great hangover cure.

There’s nothing more American than a hot dog. Whether partaking at a baseball game or from a city street vendor, hot dogs are the perpetually bad-for-you-yet-so-hard-to-resist staple of the American food landscape. But what happens when you mix a hot dog with international flavors? Magic, that’s what happens. Two of our favorite discoveries in 2013 were Japadog and Los Perros Locos.

Japadog is sweeping America and Canada with pop-up restaurants everywhere you look. With decidedly Japanese toppings like nori paper, plum sauce, tempura and tonkatsu sauce, you can’t go wrong. You simply must try the Kurobuta Terimayo – considered by many to be one of the “must eat items in the world”. Los Perros Locos transports you to Equador with salsas, chicharrones, ajillo, and chipotle for toppings. Three of our favorite menu items are Choco Loco, Pablo Escovar, Chimi Chari Chori.

Who knew so much nostalgia and curiosity could be found on stained and bent index cards? We were surprised and delighted to inherit generations’ worth of vintage family recipes in 2013 and have giggled at many of the dishes commonly served in decades past. Lazy Wife Pickles, Blueberry Boy Bait, Corn Cob Jelly, etc etc. These historical nuggets inspired us to track and document our food history and we recently launched The Cupboard Project to retain food history and prevent loss.
10.

While seafood boils come in many shapes and sizes the world over, we are referring to the traditional Louisiana crawfish boil. More complicated than you would imagine, the traditional crawfish boil includes some surprising ingredients you wouldn’t expect to find – artichoke hearts, ears of corn, whole garlic bulbs, and mushrooms to name a few. These boils take several hours to prep and properly season the broth. Ingredients must be included in their proper order and very often these events are left to the capable hands of a “Boil Master” to make sure everything is timed correctly. What a discovery to learn that what sounds simple to execute could really be considered an art form!